Subzero is a map that is easy to learn, and hard to master. You will find your way around the map with ease, but will be very hard to outplay opponents because of its many tricky spots. If you manage to maintain control over mid, the terrorists are a lot more limited in what they can do breach one of the sites. If the Terrorists do manage to take control over mid, rotations from one site to another will be a lot harder and slower, that is why having control of Middle is key to winning here.

The maps open sky-box makes this bombsite prone to smoke executes. You will have to work with your teammates to try and stop the terrorists reaching The pit, which gives them two different entrances to the bombsite. The open bombsite with a tunnel in the middle where Terrorists can jump out of anytime makes this one of the most unique features of the map. There are many angles you can hold Pit from, but make sure your teammate is covering you from Terrorists coming out of Long A.

You can be aggressive some of the rounds and smoke off Long A and boost your friend in Pit area to surprise the Terrorists.

Another great thing you can do is to boost someone on the boxes, he then drops onto the Gas Tank.

Mid control is crucial for this map. Controlling it means you have the fast rotations to both of the sites, so this is where the most of early action will take hold. If you have control of it, it is much harder for the Terrorists to breach the bombsites, and you have a fast route to help your teammates there.

There are many ways to approach the defense itself. I’d recommend that you have 2 defenders on mid at the start, one at A-connector, and second guy at B ramp. If the Terrorists decide to go towards B then defender holding A-connector can rotate fast towards sandbags to help teammates hold the site.

Terrorists can’t boost to Upper mid from the right side, and they can only climb up the ladder on the left side, so you should have the B ramp defender watching left upper mid while A connector defender watches lower side of mid.

Since the Terrorists reach the other side of mid before you, they might be out of it already and pushing you, so be ready for everything.

If you see that Terrorists tend to rush you a lot early on in the rounds, you can retreat back, and hold mid from other, more defensive angles [1] | [2]

Bombsite B is as prone to smoke executes as bombsite A. Terrorists can throw different smokes from far away without you seeing them, and holding the bombsite will require not just skill, but also teamwork. Luckily for you, there are some good spots you can use to trick them.

Since Terrorists can march only out of one direction, you can have only one defender on B some of the rounds, except if you see that they prefer to rush a lot.

Here and then, it is useful to boost someone on the pipe in Bunker. Don’t do that too often, because you can’t retreat safely from here.

Great thing you can do is to boost a teammate up on the fence. It’s a great spot because you can safely fall back if you get overwhelmed, and you hold an unusual angle, which they won’t expect at start. You can even hide on the fence, hidden from the roof, and wait for the flash from your teammate and peek after that. Keep in mind that Terrorists can do the same on their side.

Since Terrorists can only walk out of Long B, here are all the smokes you can smoke it from:

When you play Subzero it’s very important to understand that the map consists of three major choke points where you will battle it out with the defenders:

Even if the occasional rush could work, its preferable to have presence at all of these choke-points during the early stages of the round. The reason for this is:

Mid control is the most important and should be your priority for taking. Getting a kill here and controling it slows counter-terrorists rotation to either of the sites. At this point, a kill on either B or A is huge.

Even though mid control is a huge advantage, you don’t want to go for that every round. If you notice that your enemies start to put up a greater defense in mid, you want to put more pressure on one of the sites instead.

Very open sky-box allows for you to set up different smoke executes, so knowing the smokes will benefit your team greatly.

There are two ways of accessing A bombsite, with third option open if you have Mid control. You can enter the site from Long A entrance, Pit or from Sandbags. 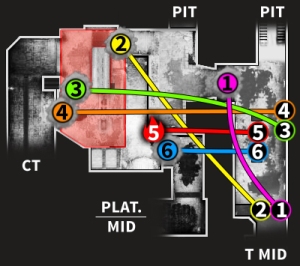 Useful smokes and a molotov :