There are two positioning ways of playing CT side on Overpass.

There are many different positions CTs can take, as long as their backs are covered by their teammates. It is good if you keep switching up your position, so Terrorists can’t prefire you as easily. Communicate with team members you are holding with.

However, you can switch it up and the Heaven guy can boost one of the players [over at the walkway sandbags] to overlook Terrorists coming out of Pipe and Connector. The other player has to maintain Canal control. Good way to stop a rush is to throw a molotov first, smoke it after, then take a position where he can watch the entrance of the canals. I don’t recommend using boost often, as Terrorists will begin to prefire and flash you out.

A good way to surprise an enemy is to push them aggressively and take one part of the map from them. Pushing construction can be crucial, because you can cut off enemy players from each other and they cant rotate fast from one side of the map to the other. Make sure you throw a smoke over the walkway wall, or use one of the A guys to [throw an early smoke from the Spawn].

Every rifler position here is okay to play, as long as you cover your AWP teammate [1] [2]. When you can hear the terrorists are coming in and executing, call one of your teammates from B to hold them off.

You can sometimes really surprise enemy team if you play at positions they are unlikely to check [3], but don’t use them often as you will get prefired or molotoved out of there.

It is always a good thing if you can stop terrorists from having full control of the map at start. Delaying them from coming to one bombsite can be crucial, since you can have only 2 players holding that site. Be sure if you’re holding this aggressive hold, that you back up in time, since Terrorists can come out of connector and pin you in toilets.

There is a very effective peek for CT AWP on party, as you can overlook Terrorists coming out of Upper Tunnels and can snipe them over the Hedge wall [1] or go for the peek on bottom of mid stairs [2]. After the pick, your teammate should flash fountain area to avoid getting rushed. Retreat to the bombsite after the pick and hold default so the flanking terrorists from Connector don’t kill you.

Both of these two players should be riflers. It is much more useful to have a gun that you can take multiple enemies out if they rush you, instead of having an AWP and you’re maybe able get one kill. Since you don’t have a support from 3rd teammate, you should play it safe and not go for aggressive pushes, because if you die, the site is open for Terrorists to take. Keep switching up your positions and be vary of terrorists [boosting over the wall] and killing you on Barrels. If you do decide to play AWP, make sure you pick a spot you can retreat to a safe position after you make your shot. Once you hear terrorist coming in, call back one of A players.

Holding default with 3 players gives you more wiggle room, the [3] player can take off-angles on short and long, as well as the toilet area.

When you hear terrorists coming in, it is useful if you molotov the Default area infront of the boxes since that is the most common plant spot.

AWPer goes for a peek towards upper tunnels, support rifler smokes mid and AWP repositions to watch Playground area from party while support watches the mid smoke. Third player smokes off connector and keeps preventing Terrorists to backstab teammates (This player is also in a very good position to help B teammates if they need it).

Back off once the smokes have dissipated and retreat to a safer position.

AWPer holds [party area from Toilets] and is listening to steps made in connector so he can back off in time.

Player 1 is hiding behind a tree while player 2 is peeking from behind a rock. When player 2 spots an enemy, player 1 should peek from tree and get some easy kills since enemies will be focused on the guy behind the rock. Back off with flashes when AWPer retreats and hold from the site.

Useful boosts you can use as CT:

The best thing to do on this map is to take key areas of the map. More of them you take, the faster you can rotate, giving you the upper hand. The most important parts of the map are Connector, Construction and Toilets. If you have control over them, you can make swift rotations from A to B. Having no control of Connector means that if you want to rotate to a different site, you either have to clear connector or run all the way through T-spawn.

The most commonly used smoke on this map is Heaven smoke.  [This is one way of smoking it] and should be a priority when you attack B site to avoid getting sniped. This smoke is very useful in 1v1 situations, even for faking, since the CT will almost surely rotate towards B and you can go through Connector to A.

If your team rushes B, the player sitting at Barrels is a big danger and can be flushed out of there with [this molotov] or if you want to take it slow, [molotov from Construction]. If you don’t have a molotov, you can use [this boost] to see Barrels and kill anyone holding that. Don’t boost too often, as they will be waiting for you. 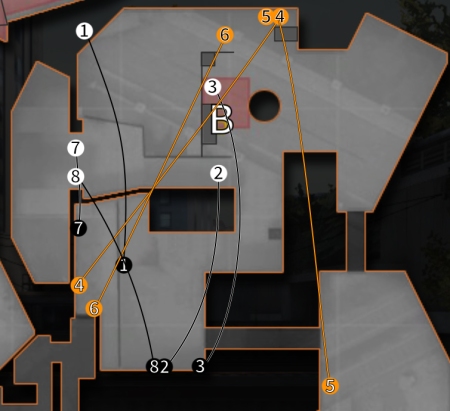 While trying to get control of A areas, there is always a danger that an AWPer is holding a corner. This side of the map is very AWP dependant and it should always be a priority to take him out, either with popflashes or smoking him out of his place. Don’t forget to [Wiggle] at corners to avoid getting killed.

One guy should always flash Playground area when you’re going out of Upper tunnels, because an AWP could be positioned either in Party or Mid stairs, peeking you.

On bombsite A it’s almost always preferable to plant the bomb towards restroom while using the yellow boxes as cover. If you plant in that spot you can stop the defuse from all angles on the terrorist side of the site.

Useful smokes and a molotov: 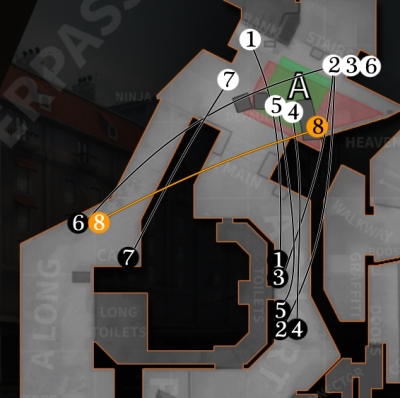